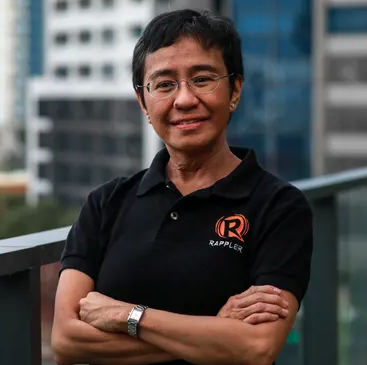 A journalist in Asia for more than 35 years, Maria Ressa co-founded Rappler, the top digital only news site that is leading the fight for press freedom in the Philippines. As Rappler's CEO and president, Maria has endured constant political harassment and arrests by the Duterte government, forced to post bail ten times to stay free. Rappler's battle for truth and democracy is the subject of the 2020 Sundance Film Festival documentary, A Thousand Cuts.

In October 2021, Maria was one of two journalists awarded the Nobel Peace Prize in recognition of her "efforts to safeguard freedom of expression, which is a precondition for democracy and lasting peace."

For her courage and work on disinformation and 'fake news,' Maria was named one of Time Magazine’s 2018 Person of the Year, was among its 100 Most Influential People of 2019, and has also been named one of Time's Most Influential Women of the Century. She was also part of the BBC's 100 most inspiring and influential women of 2019 and Prospect magazine's world's top 50 thinkers. In 2020, she received the Journalist of the Year award, the John Aubuchon Press Freedom Award, the Most Resilient Journalist Award, the Tucholsky Prize, the Truth to Power Award, and the Four Freedoms Award. In 2021, UNESCO awarded her the Guillermo Cano World Press Freedom Prize.