The Fifteenth Annual Meeting of the Internet Governance Forum (IGF) was hosted online by the United Nations under the overarching theme: Internet for human resilience and solidarity. The first phase was hosted on 2-6 November and the second on 9-17 November. The IGF 2020 Outputs are available.

The IGF website received more than 80,000 connections and almost 400,000 pages opened. Some of the countries with high number of connections were the US, UK, China, Poland, France, Germany, Netherlands, India, Brazil, Russia, Nigeria and Switzerland.

During the IGF, there were about 250 networking email connections using IGF 2020 Schedule (spontaneous one-to-one contact between attendees).

UN Web TV featured more than 15,000 live viewers, meaning more than 1,000 viewers on each high level session on average. Some of the top viewers countries included the United States, Switzerland, Comoros, Israel, Canada, Japan, Mexico, Norway, Australia or China. Sessions were also offered at the IGF's Youtube and Facebook sites. All IGF 2020 sessions are archived at the IGF YouTube Channel, with the highest number of viewers during the IGF 2020 timespan coming from India, Brazil, USA, France, Poland, Germany, Russia, UK and Bangladesh. IGF Facebook Channel also presented some youth sessions, where other countries such as Italy, Pakistan or Egypt were prominent in views.

Social media activity is estimated to have reached more than 20,000,000 people, with about 400 contributors counting only mention of #IGF2020 hashtag, an average of 1.25 original tweets and 3 retweets per contributor, with about 1,000 impressions and 10 interactions per tweet.

Organizations from five different continents joined the IGF Village with 70 booths to share their work missions with the Forum’s participants. The Village included representatives from all key stakeholder groups: governments and intergovernmental organizations, private sector, civil society and technical community.

There were also 27 remote hubs organised around the world. These included 14 from Africa, 4 from the Asia-Pacific region, 3 from Europe, and 5 from Latin America and the Caribbean, with an active online presence, video-sharing and live-comments.

Below are the visual breakdowns of the overall participation at the IGF, as well as the thematic balance within the agenda. 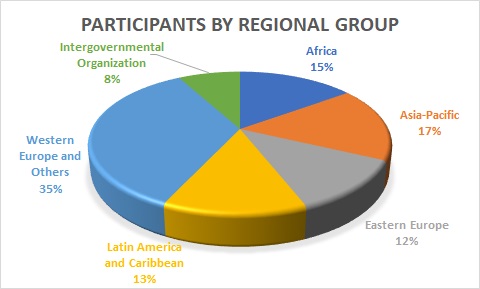 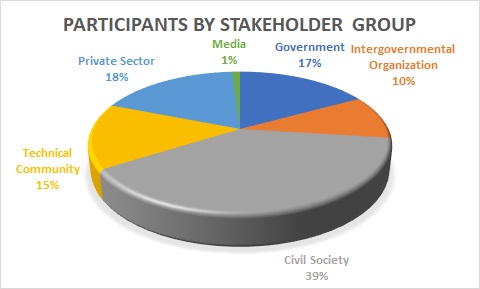 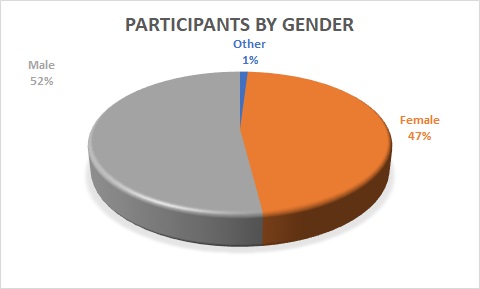 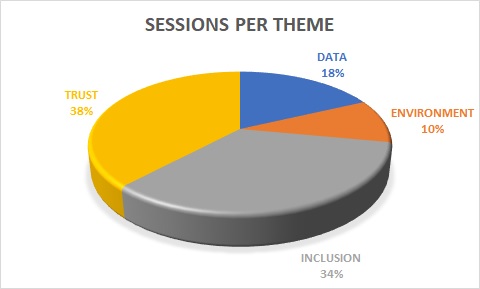